A Talk With Coach Simmons, Jr.

(Writer's Note: This article was originally published on the LaxAllStars digital platform.)

Not everyday you get a chance to speak with certain legends in the game of lacrosse. Looking back at my customer base and growth, I’ve been impressed with where my artwork and business have taken me. Recently, a virtual meeting in a FaceTime format was made speaking with master craftsman, Alf Jacques – the stickmaker of the Iroquois, and National Hall of Fame inductee and former Syracuse lacrosse coach, Roy Simmons, Jr. You would think our topic of conversation was going to be about lacrosse, but that was on the bottom of my list.

I always wondered if there were any artists and athletes, let alone artists and lacrosse players. I graduated with a BFA in Communications Design from the Pratt Institute in Brooklyn, NY and, YES, art school DID NOT have a lacrosse team. Meeting people who played lacrosse is always exciting, but meeting creatives with a lacrosse background is another level of surprise.

Coach Simmons, Jr. played lacrosse at Syracuse under his father, Roy Simmons, Sr., but aside from playing lacrosse at SU, he was an art major in Sculpture. During his time as the Head Coach of Syracuse Lacrosse he won the National Championship 6 times and coached 130 All-Americans. Along with Alf Jacques sitting in his studio, we did not talk about past national championships or standout players he coached, rather we talked about possessing the strange, yet unique combination, of artist and athlete.

Coach spoke about how his Sundays were used to decompress from his coaching responsibilities by spending time in his studio creating art. It was very comforting to speak the artist’s talk to be honest and not feel weirded out by it, while reminding myself that, that is Coach Roy Simmons, Jr. sharing his artistic experience! He also mentioned a few athletes who were also artistic and in the workforce – one of them a player who had a music scholarship in piano.

A signed print of ‘Alf Jacques – The Stickmaker’ was presented to Coach Simmons and to have Alf sitting right next to him made it so special to see.

Looking at the series of pictures taken from the FaceTime meeting, everyone involved in that meeting had an artistic ability: Coach Simmons, Jr. in sculpture; Alf Jacques a master craftsman; Doc Sorbello (the person who shot the photography and facilitated the interactive setting) in media arts production and myself in the graphic arts.

I knew deep down that somewhere, artists and athletes, or lacrosse players, had to exist. And to see it, or be with it, in this format would be an experience to never forget. 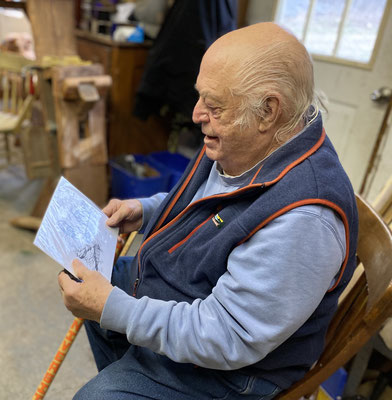 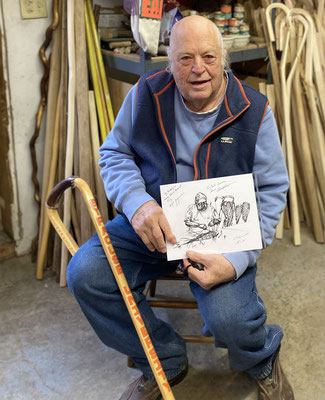 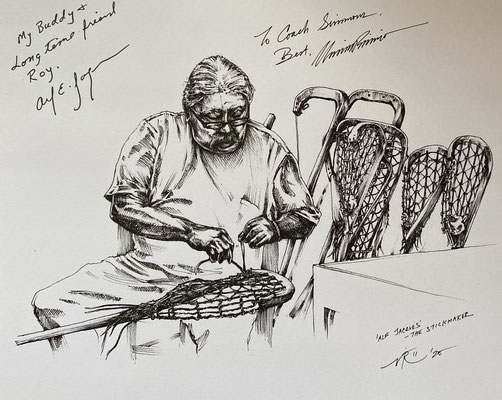 Want to be like Coach Simmons? Unsigned and signed prints of ‘Alf Jacques – The Stickmaker’ are now available for purchase.